The Glomp
aka: Glomp 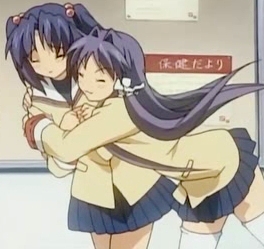 A glomper is often the Cuddle Bug. See also No Sense of Personal Space, which glompers often exhibit. If the glomper is frightened, it's a Security Cling. If the glomper is very big, the unfortunate object of their affection may suffer Belly Flop Crushing or get accidentally squashed. If the glomper is genuinely attacking, it's a Deadly Lunge or Attack Hello. In Real Life, it can turn into assault regardless of the glomper's intent, especially if the glompee Hates Being Touched, so Don't Try This at Home.