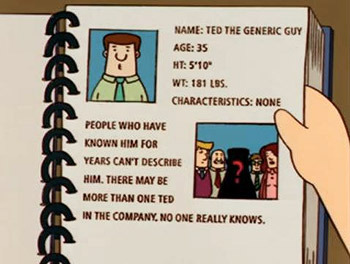 Henry: She's just a little... nondescript.
Shawn: Nondescript? I've never heard that term used to describe a woman unless she was a robbery suspect.
— Psych
Advertisement:

As one can see below, there is a tendency for these characters to be Token Minorities, for several reasons. First, they cannot be the star because they are a token. Second, since they have no traits at all, they don't have ''negative'' traits; thus, the writers can claim that they are positive role models. Another reason is related to The Smurfette Principle: the creators think the character's tokenness is itself a defining trait, so no further fleshing-out is needed. If such a generic guy is the only minority character in the opening credits, the writers will look bigoted if they try to cut the generic guy, meaning that they're much less likely than non-token generic guys to suffer from Chuck Cunningham Syndrome a few seasons in.

Played for laughs with Tad Strange the only normal resident of Gravity Falls.

Played for laughs with Tad Strange the only normal resident of Gravity Falls.