The End of the World as We Know It
aka: End Of The World 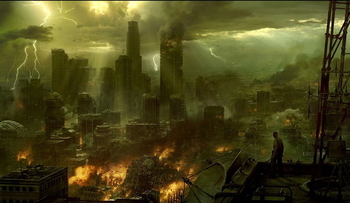 "This is the end
My only friend, the end
Of our elaborate plans, the end
Of everything that stands, the end"
— The Doors, "The End"
Advertisement:

This trope does not refer to the condition in the song by R.E.M. that is the Trope Namer for this trope, where Michael Stipe sings, "It's the end of the world as we know it, and I feel fine." Rather, it's the exact opposite.