The End Is Nigh
aka: Doomsayer 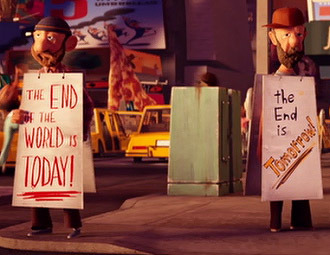 Guess which one wins.
"REPENT THE END IS EXTREMELY FUCKING NIGH"
"There's no call for language like that"
"I have to agree too much"
"END OF THE WORLD OR NOT, THERE ARE STANDARDS"
— Competing graffiti, Left 4 Dead

An obligatory trope for any depiction of The End of the World as We Know It or other potential disasters is some crazy-looking hobo (usually holding a sign), a street preacher (usually brandishing a bible) or a common guy believing himself to be a prophet (more times than not, wearing a bedsheet draped over as a makeshift robe) declaring that we should all repent because the world is coming to an end. Ha! As if that will ever happen!

See also The Cassandra, Just Before the End and Harbinger of Impending Doom. Not to be confused with Signs of the End Times, Vagueness Is Coming or A Storm Is Coming, which don't involve sandwich boards. May overlap with Sign of the Apocalypse, the Stock Phrase joking that something unexpected signals the end of the world. When the media does this it's You Can Panic Now.

Not to be confused with Edmund McMillen's indie game of the same name.