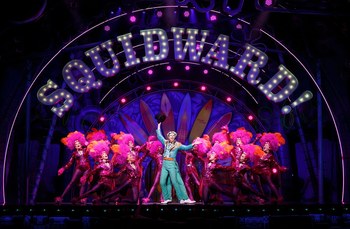 He's not a loser, and he's gonna make sure you know it.
"No, just, 11 o'clock is a significant time. If we were in a musical, this is where I would perform my big 11 o'clock number. [...] An 11 o'clock number is a big showstopping number with some sort of thematic revelation, and it usually happens around 11:00 p.m., because shows used to start at 8:30, but now they start earlier for some reason."
— Rebecca, Crazy Ex-Girlfriend

So you're almost at the end of the show, and things are looking very uncertain but you know the show's about to end. That's when you know this trope is about to kick in. The Eleven O'Clock Number is a song in a musical placed near the end of the second act, before the plot's loose ends are tied up. The song usually represents an emotional turning point or revelation for the main character(s) and is almost always the last number in the show that isn't a reprise of an earlier song or the absolute final song.

The term is a holdover from the days when all musicals started at 8:30 PM and had to have a climactic song around 11:00, because it was preferable to have audiences out shortly afterwards. In an exception to the anti-rule that musical numbers don't have to be, and usually aren't, written in the order in which they appear in the show, the 11:00 number is very often the last one added to the show.

Largely a Theater trope. Seen in musicals and works that follow the musical format, as well as the odd Concept Album. Compare and contrast Climactic Music. Not to be confused with The Song Before the Storm, which is sung before the climax begins, not to initiate it.

Live-Action TV
Music
Theater
Professor Hidgens: This is humanity's eleventh hour, and I've prepared something for the occasion.
Western Animation