The Dandy
aka: Metrosexual 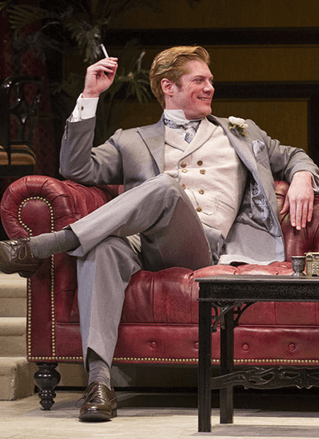 Wear something ill-fitting? Or worse, out of style? AS IF!
"A Dandy is a clothes-wearing Man, a Man whose trade, office and existence consists in the wearing of Clothes. Every faculty of his soul, spirit, purse, and person is heroically consecrated to this one object, the wearing of Clothes wisely and well: so that the others dress to live, he lives to dress."
— Thomas Carlyle
Advertisement:

The Dandy is someone who’s intensely concerned with his appearance: He's always well-groomed and generally avoids physical exertion, lest his hair or clothing become mussed. He usually prides himself on being cool, laid-back, and possessing his own unique flair. He is also typically a hedonist who highly values comfort and living the good life.

In comedic works, writers will often pair him with child characters who don't buy into his act at all, or a gorgeous woman who happens to be incredibly cynical about men.

The modern connotations of the word "Dandy"

are somewhat ironic, since the original dandies were rebelling against the over-the-top fashions of 18th Century macaronis.

With dandies, the emphasis was on simpler, more "masculine" clothes that emphasized high-quality fabrics and immaculate tailoring rather than excessive decoration.

Being male is not a strict requirement, especially for Bifauxnen, but is very likely to overlap with Gentleman Snarker or Upper-Class Twit. Also compare and contrast with Sharp-Dressed Man. Many of these fall under In Touch with His Feminine Side because of the widespread perception that Vanity Is Feminine (again, not a connotation that “Dandy” would necessarily have had in its original usage).

A rough Distaff Counterpart would be The Fashionista. For the well-dressed man who jumps into combat rather than running from it, see Agent Peacock and Action Fashionista. Compare and contrast Pimp Duds, which has more similarities to the "macaroni" style.

Not to be confused with the long-running British comic of the same name.