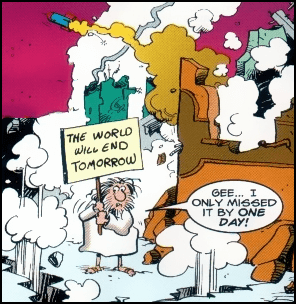 Okay, so one of the characters is a little... odd. He's a Talkative Loon who rambles, talks to people and things that aren't there, and rarely pays much attention to what's going on around him. So it's just natural that the other characters ignore everything this guy has to say...

Until, in a strange twist of hindsight, it turns out he was right all along.

Sometimes the guy's truly the Only Sane Man whose condition is due to the frightening nature of the things he had uncovered. Sometimes, he is mad but still got one thing right (he's usually smart enough to notice that this one is somehow different from his usual delusions), but people who already know him will just dismiss this as another lie. And occasionally, he's Right for the Wrong Reasons (sometimes despite particularly bizarre Insane Troll Logic).

Compare Actually a Good Idea, Dumbass Has a Point, Jerkass Has a Point, No Mere Windmill, Properly Paranoid, Mad Oracle, Cassandra Truth, The Cassandra, Cue the Flying Pigs, The Dog Was the Mastermind and I Warned You. Contrast Windmill Crusader. This trope may result in someone else Giving Up on Logic. When combined with Breaking the Fourth Wall, may result in Audience? What Audience?, and a meta-version of this can overlap with Accidentally Correct Writing. If it's the Madness Mantra that was right all along, perhaps you should be a little afraid... And if the whole thing was a joke that happens to match reality, it's Joke and Receive (doesn't require a Cloudcuckoolander).

Arlo apparently correctly identifies a mother and her baby as an undercover police duo.

Arlo apparently correctly identifies a mother and her baby as an undercover police duo.