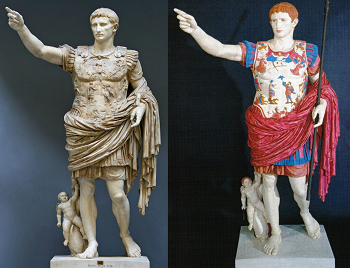 The reality tends to color people surprised.
"It is doubtless true, as somebody pointed out, that a yoke of oxen would be driven, not with a whip but with a goad; but the lash of a whip can be heard on the air, whereas it is useless to ask the studio-effects-man to stand by making a noise like an ox-goad."
— Dorothy L. Sayers, introduction to The Man Born to Be King
Advertisement:

The Coconut Effect describes any sound effect, special effect, or design feature that is unrealistic, but still has to be included because viewers have been so conditioned to expect it that its absence would be even more jarring.

The trope namer is the traditional foley effect of using hollow coconut shells to recreate the sound of horse hooves in theater, and later radio, film and television.

Horses hooves do sound like a pair of coconut shells being tapped together... when the horse is walking on cobblestones or some other hard pavement. However, it's fair to say that the vast majority of depictions of horses are upon dirt, grass, or other unimproved terrain where the sound would be muffled to inaudibility. Nevertheless, filmmakers and radio producers stuck the coconut sound on the audio track even when the horse was on grass or gravel (rarely even in synch with the movement of the horse) until audiences came to expect the specific audio cue. Real recorded hoofbeats on later, more sophisticated productions sounded "wrong" to test audiences (or more likely, clueless producers).

Many other Stock Sound Effects are prime examples:

This trope does not apply exclusively to sound, but to any instance of an element that is used simply because the audience, consciously or unconsciously, expects it to be included, and/or because Stock Visual Metaphors allow writers to avoid long expositions via Show, Don't Tell:

This trope has a sister trope in the Rule of Perception, which explains why one would bother with any of these effects at all.

The color version of this trope is Stock Object Colors and Typical Cartoon Animal Colors.

See also Reality Is Unrealistic, Artistic License, Science Marches On, Common Hollywood Sex Traits, Mickey Mousing, Radio Voice, Vinyl Shatters, and the semi-related Extreme Graphical Representation. Related in concept is The CSI Effect and Eagleland Osmosis. Nothing to do with Coconut Superpowers (except insofar as both relate to Monty Python and the Holy Grail). Thankfully, this won't be causing any real-world casualties. We hope. Compare Aluminum Christmas Trees and Small Reference Pools. Also see Necessary Weasel.