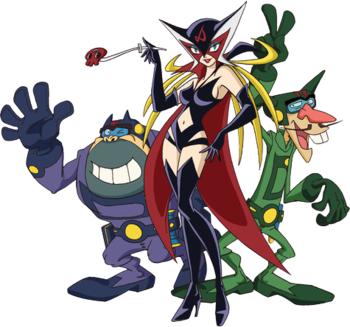 A Power Trio made up of a domineering character and two henchmen or Co-Dragons. The two henchmen usually look physically different (one short and fat, the other tall and skinny/buff) in addition to having different skills, often Brains and Brawn or an unreasonable facsimile; the position of boss may be gained simply by assertiveness. Their boss is usually convinced they're master criminals, even though the two subordinate characters usually fit the bill for Stupid Crooks. Terrible Trios are very rarely the real Big Bads, and the whole group tends to be played for comedy in the long run. They may have no dark motivations other than fortune or fame, and it's easy to sympathize with them through their repeated defeats. They usually have a certain degree of Karmic Protection.

Sometimes, there's a higher-up that the team's boss is accountable to. That higher-up is usually closer to True Evil, and considers the team, boss and all, to be ineffective at best. In a more serious story (or if Cerebus Syndrome is about to kick in), expect the goldfish poop to get flushed on most occasions.

In many anime, the boss is usually more attractive and the opposite gender of the lackeys. The Terrible Trio are often gangsters, who are strangely less competent than the psycho villain.