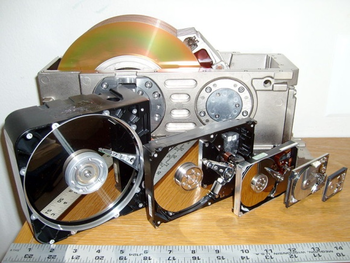 Smaller media. Larger capacity. Not Time Lord technology.
RECR: There's no way you can defeat the superior power of my massive 56-kilobyte processor!
Coop: I've got 10-year-old video games that are smarter than you!
— Megas XLR
Advertisement:

So little Timmy is watching a show from the 1990s. In one episode, the characters are all excited because of a new computer game that will be released very soon. A computer game — on CD-ROM!

You see, Technology has marched on, and things like CD-ROMs, VHS cassette tapes, etc. have relatively recently become either so little-used as to be obscure, or obsolete altogether. This isn't Zeerust, which is about futuristic tech becoming old rather than about modern tech becoming old. The important qualifications of this trope are as follows:

As far as that last point is concerned, remember that there have been spectacular technological leaps in just the past twenty years — within the lifetimes of many (read: most) Tropers, in fact! note And if you haven't experienced it yet, don't worry. The first time will hit you completely by surprise sometime within the next five years. For the most part, once a technology is invented, it tends to develop at warp speed. Remember, it took only about 65 years (1903-1969) to go from one rickety plane barely able to get off the ground to putting a man on the MOON! So this can lead to some odd moments for those who grew up watching certain things go from "absolutely essential" to "taking up space in your basement".

To clarify, an excellent example would be a scene in a 1995 episode of Friends where Chandler gleefully describes all the awesome features of the brand-new laptop that he has received from his company. Then, it really was pretty impressive, the joke being that he'd just be using it to play computer games and type out lists. But now...

"Twelve megabytes of RAM, five hundred megabyte hard drive, with built-in spreadsheet capabilities and a modem that transmits at over 28,000 bps!" note Episode "The One With The List", first airdate November 16, 1995. At that airdate, those features were quite impressive, especially for a laptop.

There was a time when these specifications would be mockingly contrasted with a then-modern counterpart. However, technology has moved on so far and so fast that Chandler's computer is now unimaginably primitive; within twenty years of the episode's first airdate, even a low-end smartphone was over a hundred times more powerful than that in every way, while fitting in the user's pocket and costing less than a tenth of what his company would have spent. Because of this, most writers nowadays don't get too specific about computer performance, to avoid sounding dated before...well, before next week, frankly.

Somewhat related are those moments during not-so-old films where you realize the entire plot could be resolved with something the world takes for granted today — cell phones, for instance. A perfect example of this would be Home Alone — the film was originally released on November 16, 1990, however within twenty years, the entire movie likely would have lasted about half an hour at most once you realize that a power outage likely wouldn't have caused a cell phone's alarm clock to reset like the plug-in alarm clock was, cell service wouldn't have been disrupted in the same way the landlines were and in post-9/11 America, the family would have had plenty of time to realize that Kevin was missing due to the very lengthy amount of time it takes to travel through American airports due to security screenings, baggage checks, and so on.note And "lengthy" is not an exaggeration in this instance — it's often recommended that passengers arrive to the airport three hours before the flight even takes off for international flights, and all passengers should be at the boarding gate at least thirty minutes before departure. Since the family only had forty-five minutes to get from their house to the airport before the plane took off, they would have effectively missed the flight. Even invoking Cell Phones Are Useless wouldn't have worked very well. If Kevin had a cellphonenote Even if just the low end one described above., it being broken would be the only somewhat plausible minor hurdle.note It would be plausible only if it broke too late for Kevin's parents to get a replacement in time. In this case, he could have used a computer instead unless it also depended on the landline for connectivity. It having a dead battery with no way to charge it or having no service would just be too improbable.note He likely would have had at least one spare charger and he was in a house that was only briefly without power in a suburban neighbourhood that would likely get decent cell coverage. Someone could have easily gotten in touch with him directly or through someone else in the area at the touch of a button on their cell phone via a messaging app, social media or email (among other easy methods) using one of the ubiquitous free airport wifi hotspots as opposed to having to go through the hassle of finding and gaining access to one of the limited number of coin-operated payphonesnote  which being in France meant needing sufficient change of the appropriate currency in order to place an international call to Chicago PD to send an officer to the house to check on him.

A related and increasingly common source of humor shows down-on-their-luck characters as only able to afford the kind of older technology found in thrift stores today. Additionally, shows set in the past will often lampshade this for humor. A Long Runner might even have its earlier episodes/books/etc. have one level of technology, and later installments have more up-to-date technology with little or no Hand Wave at all.

Often turns a work into an Unintentional Period Piece. Can sometimes be a Trope Breaker: A change in cultural context that affects Tropes. A cousin of sorts to Our Graphics Will Suck in the Future. See Magic Floppy Disk for cases when the tech onscreen in a futuristic series was dated when the show was made.

See also Science Marches On, Abandonware, Computer Equals Tape Drive, What Are Records?, and some examples of Aluminum Christmas Trees. Contrast I Want My Jetpack, where the writers overestimated the advance in technology. A fictional world where technology doesn't march on despite the passage of time is in Medieval Stasis or Modern Stasis. The question of how "advanced" a piece of technology looks to a layman observer, and what that even means, is part of The Aesthetics of Technology.

A lot of the old science fiction features a world with food shortage and rationing due to extreme overpopulation. 90% of the food is yeast or synthetic. The reasoning behind this is an assumption that while population will increase at an exponential rate, food production will only increase linearly, therefore there would be a point where population surpasses food production. This theory is known as Malthusianism

Except that... the figures stated have been surpassed or near so, and there is significant overproduction. This is largely thanks to the Green Revolution

which, in addition to mechanization of planting and harvest, also included breeding a lot of high-yield and drought- or pest-resistant crops. (Not all "technology" is machine-based.)

Related to Sci-Fi Writers Have No Sense of Scale when it comes to population growth; many of these examples have populations in the low billions and treat it as catastrophic overpopulation, not merely in terms of agriculture but in terms of population density. For comparison to many of the numbers below, Earth's population is 7.9 billion and climbingnote though the rate of climbing is slowing as of 2022.

It should be noted that many of the agricultural technologies of the Green Revolution depend on agrochemicals whose precursor chemicals are usually derived from crude oil, which isn't getting any cheaper or easier to extract in the long run, so Post-Peak Oil settings do not fall under this trope. Whether this stays true depends how well various proposals for turning various waste products (ranging from plastic to sewage) back into crude oil pan out.

Another thing to note is that even today there's still debate on whether we've hit overpopulation. As noted above those who say yes point to dwindling natural resources and say that we can't sustain this level of food production forever, while those who say no indicate that mathematically there is still enough land to grow food for all 7+ billion people today and give each of them a few acres to live, and the issue lies more in logistics. (Those who say yes will retort that one can't just dismiss the whole thing because a model that assumes everything is run perfectly optimally says so, and need to take into account real-world factors.)

Can be justified by the world's agricultural breadbaskets having been contaminated by drought, pollution, radiation or disease, leaving too little viable land to farm even hyper-productive crops on.

Drifting is cool, right? Keeping your head cool and your car in balance while on two wheels is the epitome of badass driving? It might have been ...until the 1970s. Most modern cars, not just performance cars, have tire sizes which a few decades ago were just for Ferraris and Porsches and the quality of tires and suspension is ages beyond. Even a humble modern hot hatchback may pull stunts which in the past were barely imaginable outside racetracks. Well, if a car still works well even after a decade, it can become What a Piece of Junk.
Film — Live-Action
Literature
Live-Action TV
Music
Video Games
Real Life

When transistors came around in the '70s to do everything a vacuum tube could, it'd mean that the old vacuum tube would go the wayside, right? Or when integrated circuits came around, who needed a discrete transistor? Or hell, why are we even using electricity? Optics would be way cooler.
Literature
Real Life

Who else here has ever talked about "taping" a show on to a hard disk, or "rewinding" a DVD or YouTube video? Some media applications call it "seeking" or "skipping", but those are even older terms, even if they're not tied to specific mediums. It's also still a trend to call any solid-state storage media a "tape", after audio cassette-tapes and video-tape formats like VHS.
Anime and Manga
Comic Books
Fanfiction
Film — Live-Action
Literature
Live-Action TV
Tabletop Games
Toys
Video Games
Web Original
Western Animation
Real Life