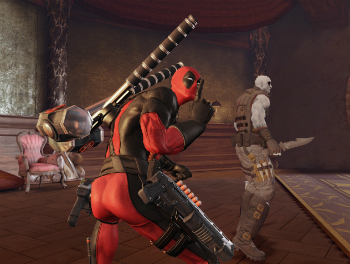 "Your colors are too loud! He'll hear you!"
"...the dark clothes I get, stealth and all. But green, blue, red, purple, and orange? Why do you wear masks with such bright colors? Isn't that kind of eye catching?"
— April O'Neil, Same Difference, "One Heck of a Birthday Part 2"
Advertisement:

These ninja don't quite get "camouflage means colors that blend in." They wear bright, obvious outfits, and common sense dictates that they shouldn't be stealthy at all. And yet... they are. They rarely use any magical powers, Applied Phlebotinum, or other fiction-specific cheats. They're just that good, and are skilled enough at sneaking around that however highly visible they might appear to be, in practice they're extremely hard to spot and harder to catch.

These ninjas are most frequently seen in Comic Books, Anime, and Animated Shows, though it sometimes turns up in Live-Action TV as well.

For Comic Books, the trope likely came to be because until about 25-30 years ago, the process used to print comics was only a four color process. The Animation Age Ghetto may also have some culpability here because bright colors attract the attention of children.

Ninjas whose costumes are black or other dark colors but can sneak around unseen in civilian clothing also fit this trope. Unlike the Highly Visible Ninja, they don't necessarily travel in packs of 20. They don't make those Funny Bruce Lee Noises, nor do they twirl their weapons and pose at great distances from the enemy unless they have a weapon or superpower that makes it worth it to do so. They don't tend to worry about the Conservation of Ninjutsu, either; alone or in pairs, these ninjas are good enough to take out lesser ninja without wrinkling that costume. And if they do get spotted? Well, too bad for the spotter.

Technically speaking, it is possible for someone not trained as a ninja to be so stealthy they're unnoticeable even in garish colors, but it is rarer.

Somewhat Truth in Television; A ninja dressed all in black would stick out like a sore thumb against a starlit sky. Anytime actual ninjas suited up for nighttime espionage, they would wear navy blue.

They are the result of a natural ability or developed skill of people who start out and are always basically humanoid shaped (or whatever passes for same on their world of origin).

Contrast with Highly Visible Ninja, who is quickly noticed, often Lampshaded, and subsequently attacked (and who, assuming they survive, may evolve into this trope).