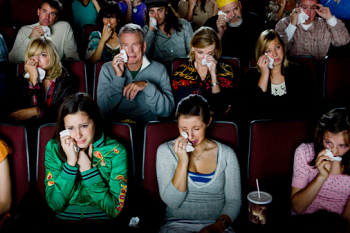 This being one of the YMMV items, one person's Tear Jerker may be another's Narm, which is often a failed attempt to induce this. Comments such as "If you didn't cry at _____, you have no soul" are not welcome here; since this is defined by emotional reaction, what causes someone to burst into tears may cause another to shrug or even laugh, and guilt-tripping people just because they don't experience the emotions you want them to is not cool, dude.

Some tear-jerking moments, especially of deaths, can wind up being horrifying or traumatizing as well. Compare Harsher in Hindsight, which may be a Tear Jerker in and of itself. Contrast Heartwarming Moments, which can induce tears for more positive reasons, although they can overlap.

A teary-eyed Widow Tweed leaves Tod in the wild, silently gesturing at him not to follow her back as she leaves.

Example of:
Shoo the Dog

A teary-eyed Widow Tweed leaves Tod in the wild, silently gesturing at him not to follow her back as she leaves.