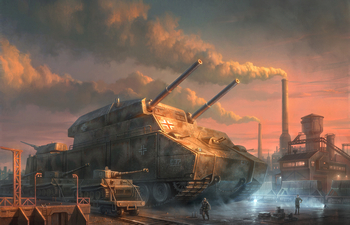 The Landkreuzer P-1000 Ratte, planned by Nazi Germany in World War II but never put into production.
"Though I charge through the valley of the shadow of death, I shall fear no evil, for I am driving a house-sized mass of fuck you."
— Anonymous Mammoth Tank crewman, Tiberium Wars
Advertisement:

In large modern warfare engagements, infantry may as well be Cannon Fodder. You want something that can Hold the Line. Something with a BFG and/or More Dakka, crawler treads and (literal) tonnes of armor. You want a tank.

Real Life tanks have large cannons to take on other tanks and fortifications, and (usually) secondary weapons to deal with infantry or aircraft. In fiction and reality, other tanks may use anti-infantry or anti-aircraft weapons instead of cannons.note These do exist in Real Life, but they're not called tanks. To make the distinction even more difficult, many of these are based on existing tank chassis, so they look like tanks that have had their turrets swapped out. Cue journalists and the general public calling them "tanks" anyway. The tank's size and mobility may also be used as a weapon to crush people, cars, and walls. The armor is thick enough to stop small arms fire, most of it in the front, with the weakest areas being the rear, bottom and top. Expect enemies to take advantage of this for massive damage.

Of course, the above paragraph refers to tanks around the size of today's main battle tanks. Sometimes that's not enough. They need to be bigger! Big enough to crush the other tanks! And carry loads of weapons! While racing donuts around them! And the armor is able to withstand Martian Death rays! And it has NBC protection! It's a FLIPPING BUNKER ON TRACKS. Oh, and the wheels on the tracks are equipped with armored gun pods.

Other armored fighting vehicles, like armored personnel carriers, self-propelled artillery and tank destroyers may be called tanks. They're not. Don't be fooled! Likewise, don't listen to the deranged lunatics who keep wanting to put legs on them. Ridiculously impractical, that.

Related to Cool Car, Cool Bike, Cool Train, Base on Wheels, and other vehicle/warfare tropes—this is basically Cool Tank. Has nothing to do with Shorttank, which makes you say tank goodness in a completely different way. Also has nothing to do with playing a damage-sponge character in an MMORPG, or with the oxygen storage unit strapped to the back of a SCUBA diver.note Well, maybe this trope has *a little* to do with these things: tanks in MMORPGs are named after *this* kind of tank, because they are heavily armoured characters who can soak up a lot of damage while also dishing it out; as for the kind of tank that holds gas or liquid — that is actually the *source* of the term as used in this trope, odd as it may seem! When the first practical tanks were being developed around the time of World War I, they were so called in documentation as a code term, to confuse the enemy and throw any spies off the track; for one reason or another, the code name just stuck. They might just as easily have ended up with the admittedly cooler name of "land-ships."

For armed tank-like vehicles, which have legs instead of good ol' treads, see Walking Tank. For ones which float, see Hover Tank. For ones that can travel underground, see Drill Tank. When the military geniuses of the world finally realize there is no firepower like battleship firepower, one may witnesses the ultimate tanks: Land Battleships. For when things in video games (such as people) act like tanks when they shouldn't, see Tank Controls. Sapient Tanks can think for themselves.

When tanks are useless in media, see Tanks for Nothing. For inaccuracies with armoured vehicles, historical and otherwise, see Tanks, but No Tanks. For information on tanks and other armored vehicles, see Armored Fighting Vehicles.

If you looked up Mechanized Infantry and expected to see a giant robot with a gun, try looking up Real Robot instead. For tank engines

Although the "tank" class/role in video games gets its name from the role of literal tanks, they have nothing to do with this trope.

By the way, they are called "tanks" because when the British were first developing them in World War I, they were called water carriers or water "tanks", in an attempt at secrecy.

In a murder that is unusual even by Midsomer standards, the first Victim of the Week in "The Town That Rose From the Dead" is run-over by a tank.

In a murder that is unusual even by Midsomer standards, the first Victim of the Week in "The Town That Rose From the Dead" is run-over by a tank.