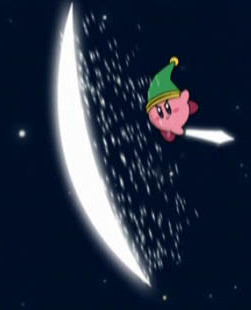 SODO BIMU!
"You hold in your hand
A sword that shoots laser beams."
— Brentalfloss, "Zelda with Lyrics"

Swords are awesome. For a hero worth their salt, they are practically a requirement. But there's one tiny little flaw: a complete lack of range. Now, how would your One-Man Army hero be able to routinely face and prevail over entire groups of enemies packing (cross) bows, firearms or ranged magic? Well, there are many ways around depending on your setting, but there's hardly anything that is a more distilled Rule of Cool than Sword Beams.

A character will make a slashing motion with their Cool Sword, but at a distance, optionally charging the weapon with power right before this. What springs forth is a beam of Pure Energy, usually crescent-shaped. It travels through the air or on the ground, either keeping the original size and shape or covering a full sector of the swing, thus growing larger with distance. Often features Absurd Cutting Power, allowing The Hero to fell entire companies of Mooks in one fell swoop. Arbitrary Maximum Range prevents it from cutting anything outside of the intended battlefield.

Another version is stabbing or smashing the blade into the ground and creating a Ground Wave that may or may not actually tear through the earth as it crashes towards the enemy. Sword Beams fired by thrusting a sword at its target (or even just pointing the sword in their direction and using it as a Magic Wand) are rarer, but they do exist.

When magical this is a type of Full-Contact Magic, and when not it falls under Implausible Fencing Powers. If the "beam" is a shockwave of compressed air which cuts things, then it's also a Razor Wind. If used with a Laser Blade, it often looks more like the blade is extending to strike the target.

See also Bayonet Ya (for guns with what are basically swords attached) and Mix-and-Match Weapon (for swords that are also guns), and Throwing Your Sword Always Works (for another, less magical way of using a sword as a ranged weapon). Compare Energy Bow (for bows that shoot beams) and Boom Stick (for the Magic Staff, which is usually a magical tool first, and a weapon second). Can be combined with Blade Spam for a unique variant of Beam Spam.

Not to be confused with a Laser Blade or with Beams Shaped Like Swords (though a sword made of beams that shoots beams made of swords would be pretty awesome).

It worked like a regular sword in the book and film, but in the video game version, Gryffindor's sword emits magical beams.

It worked like a regular sword in the book and film, but in the video game version, Gryffindor's sword emits magical beams.