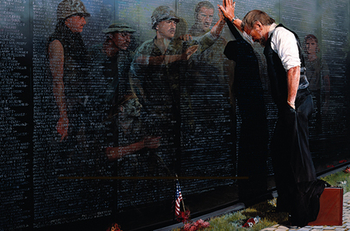 "Have I earned this...?"source Lee Teter, Reflections, 1988
"Oh my friends, my friends, forgive me
That I live and you are gone.
There's a grief that can't be spoken.
There's a pain goes on and on..."
— Marius, "Empty Chairs at Empty Tables", Les Misérables
Advertisement:

You might be the Last Of Your Kind or someone else made a Heroic Sacrifice for you or you lived through a Restricted Rescue Operation, but whatever the reason, you're going to feel a massive sense of guilt. An easy way to generate Angst. Practically a guarantee in cases of Death by Childbirth, or when one is a Sole Survivor.

Can also lead to the victim becoming a Death Seeker or Failure Knight. May cause Past Experience Nightmares, Drowning My Sorrows, and various other ways to cope, while trusted friends and/or professionals plead with him to realize that he has nothing to beat himself up about. Contrast You Should Have Died Instead, where one survivor tries to evoke Survivor Guilt in another. Sometimes (although not always), Who Wants to Live Forever? is an extreme case where an immortal character among a mortal community feels this.