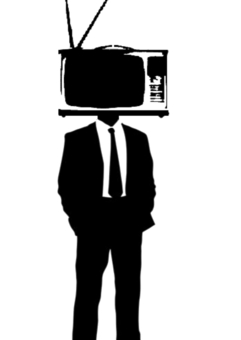 A recurring motif in Surreal Horror, Surreal Humour, and, really, surreality in general, is an apparently human being whose head is something else entirely. In some cases, it's simply been replaced with the head of some species of animal; in others, it's actually an inanimate object walking about on a human body; in still others, it's neither a human with a strange head nor an object piloting a human body, but rather some other entity that looks mostly human. Whatever the reason, the result is often referred to as an "object head".

In any case, the effect ranges from unusual to sinister; they appear mainly in dreams, visions, hallucinations, and if they appear physically it's a good sign that Reality Is Out to Lunch. As a result, they are frequently subjects of the Rule of Symbolism.

Compare Malevolent Masked Men, which plays on much of the same imagery in a way compatible with a more mundane setting or situation. Compare and contrast Anthropomorphic Personification and Physical God - many take the form of a person with the head of something else, but unless they are used for surreality and metaphor they are not this trope; instead, they are Non-Human Head, its supertrope. Not to be unnecessarily confused with TV Head Robot.