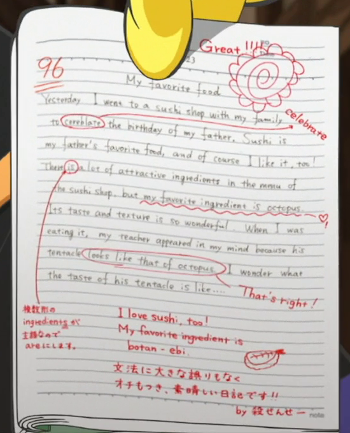 96% isn't bad, right?
"I'll chisel your gravestone. Sleep well!"
— Wolfgang Krauser, Fatal Fury 2, proving that even SNK can get it right when it comes to proper English.note The voice actor is American, though...
Advertisement:

The sounds used in non-English languages are often very different from the sounds in the English language, and combine in very different ways from anything used in Western speech. The closer a language is to English, the more approximate the sounds/language will be, but there are still situations where the non-English language has sounds that English doesn't, and lacks sounds that English does have. General American English has 13 vowels, 28 consonants, and more diphthongs than you can dip a thong at, they're not all going to match up to every other language in the world.

The result of all this is that when you hear enough language produced with the "wrong" sounds, your ear becomes trained to it, and it sounds natural. Then, when those same voices speak English with English sounds, it's like ice water down the back of the neck. If you can imagine Andy Kaufman dropping his Latka accent in the middle of an episode of Taxi, you might understand what this sounds like.

Makes sense when you think about it. For many people around the world (especially continental Europe) developing highly advanced English skills is considered an inextricable part of joining the global, internationalist elite. Some of the errors commonly made by many native speakers of English will hardly ever happen in extra-Anglophone circles, where people will strive to make their English as grammatically correct as possible, which is why the likes of the omission of the Pluperfect tense ("had been", "had done" etc.), omnipresent in American English, will be rather hard to come by in when listening to a speaker of English from, say, Scandinavia.

Similarily, since the vast majority of the non-English speaking global population will start learning both the spoken and written variant of English at roughly the same time (as opposed to native speakers who will spend at least a couple of years just listening to English before they begin to read it), you will rarely see them confusing phonetically close yet visually and semantically distant phrases, such as "your" and "you're".

Subtrope of Surprisingly Good Foreign Language. See Gratuitous English for when non-English language works add English for flavor, but don't get it quite right. It's also worth noting that some non-native English speakers, especially if they've been studying and using English since an early age, may get rubbed the wrong way if they take your surprise as a statement that someone from their country shouldn't be capable of achieving fluency.

This is why Kiryu Coco's news program can never be aired in English.

This is why Kiryu Coco's news program can never be aired in English.