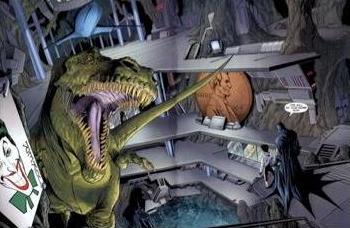 Batman collects weird trophies.
Poison Ivy: So, Harv, what became of the giant penny?
Two-Face: They actually let him keep it!
— Batman: The Animated Series, "Almost Got 'Im"
Advertisement:

A Super Hero trope that originated in The Silver Age of Comic Books.

Way, way back in the campy Silver Age, superheroes usually had too much time on their hands. As did their readers. As such, the superhero should be able to waste time in the same kinds of hobbies as their readers did.

That's why we have so many superheroes who are into collecting. But, instead of collecting rocks or strains of alien herpes, they'll collect alien rocks and their enemies' evil weapons. These collections might be all over their base, have their own room in the base, or be only a modest trophy rack with all the keys to different cities they saved from destruction.

When the reader is treated to a view of their collectibles, the result is a Continuity Cavalcade of references to prior plots that often reaches into Scenery Porn territory. Having collectibles that appeared in previous issues is a good way of building the legend around a character, giving space for interesting plots and helps explain why exactly character has such a big Secret Base. Sometimes, it may serve as Chekhov's Boomerang, as the hero takes an old relic from his collection to defeat an enemy that has invaded the hero's lair. On the other hand, some writers just forget all about continuity and say, "Heroman goes to the room where he keeps a trillion of his old foes' super-trinkets," or something. In which case, the trophies are Noodle Implements and Cow Tools that leave the reader/viewer wondering: "How the heck did he get that?"

This might seem odd today, with the change that both superheroes and the hobby of collecting have gone through. As superheroes started to be more relatable, they had too many problems on their hands to worry about their collections of MacGuffins all the time. And, as children (and, let's face it, adults) became more interested in collecting manufactured items such as Star Wars action figures or even comic books, the idea of having a never-ending collection ceased to exist for those of us who aren't filthy rich.

Also, superheroes who put too much thought into their collections began to look like a bunch of overgrown children.

Superheroes also have a thing for making shrines to people: Photos of enemies, statues of friends and Love Interests, the chattel that belonged to their old sidekicks, et cetera. This might be a bit creepy to modern readers: "So, Superman, you really have a room in your fortress filled with depictions of your scantily clad cousin? Why, exactly?" But it makes sense when you consider that, comics being a visual medium - decades before the Decompressed Comic revolution - it was pretty hard to represent someone's feelings without resorting to clunky speeches like, "Jane is so beautiful! If only I could tell her how much she means to me! But I dare not...for a girl so lovely would never marry a lame man!"

For examples detailing the collecting exploits of more normal individuals see The Collector of the Strange. Compare Shrine to Self. Subtrope of Battle Trophy.