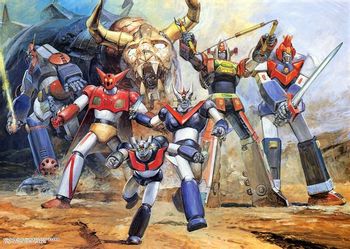 From left to right: Combattler V, Getter Robo, Mazinger Z, Great Mazinger, Daimos, and Voltes V. Daiku-Maryu pictured at the background. All designed to defend the Earth 24 hours a day. Just like any other weapon.
"So much for the laws of physics!"
— Getter Robo Armageddon
Advertisement:

In contrast to Real Robots, Super Robots are often (but not always) the creations of eccentric Mad Scientists who work alone in their secluded laboratories; exactly where they get the parts, funding, and equipment, manage to even build the thing without help,note For comparison, the closest thing in size and complexity to a Giant Mecha in real life is probably a modern aircraft carrier — which, very roughly, takes 150,000 people and 7 years to build. Even allowing for a lot of these people not working on the carrier for the entire course of its construction, you're still looking at a build time many times greater than the average human lifespan if only one person was doing everything. or how they manage to keep anyone else (except the select few needed to drive the plot) from finding out about their activities is usually left as an exercise for the viewer. The pilot tends to be an average-across-the-board Audience Surrogate, sometimes even an Ordinary High-School Student, who falls into the cockpit and discovers they have a natural aptitude for piloting a giant robot. Instead of using an elaborate system of controls like those found in an airplane cockpit, the pilot controls a Super Robot using a mere handful of buttons (and maybe a joystick), motion capture or even a mind-reading system, and the motion of the mecha itself is often implausibly humanlike. Overall, the science behind a Super Robot is usually soft science fiction, with the Rule of Cool and the burning passion of The Hero and his friends and lovers having more effect on the machine's capabilities than a list of well-defined specifications. In contrast to a Real Robot, where the mecha is just one more piece of equipment in the overall arsenal (even if it is the cornerstone), a Super Robot is an enabling device for its pilot to pull off badass heroics.

Super Robot shows are typically personified by "Love/Courage/Compassion/Friendship/Righteous-Anger/Insert-Positive-Emotion-Here Conquers All", and almost always have at least one character that is Hot-Blooded, though there are certain notable exceptions... mostly those directed by Yoshiyuki "Kill 'em All" Tomino, to whom anyone can die is less a possibility than a life philosophy (...or at least it used to be). They also typically follow the Monster of the Week format, especially in older shows, though as always there are exceptions. Super Robots tend towards idealism on the Sliding Scale of Idealism Versus Cynicism and romanticism on the Romanticism Versus Enlightenment scale.

Checklist
A handy checklist to see if a mecha is a Super Robot as opposed to a Real Robot:
Advertisement:

The chances of the series being a Super Robot series rises exponentially with each item present. This, of course, doesn't apply to total parody or gag series, such as SD Gundam.

Note that in general the longer a Real Robot series runs, the higher the chance that the protagonist's mecha will start to display Super Robot traits. If this is the Grand Finale the odds are doubled.

An American robot versus a god

Mike gets to use Pat's S.T.R.I.P.E. against Eclipso. Sadly, the chainsaw and flamethrower don't do much against him.

An American robot versus a god

Mike gets to use Pat's S.T.R.I.P.E. against Eclipso. Sadly, the chainsaw and flamethrower don't do much against him.