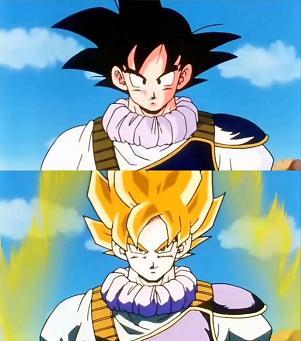 "Hmm, what a useless transformation. You've changed your hair. So what?"
"When a villain transformed, it was a nightmare, the worst possible case scenario, as the gap in power now widened into an abyss. (...) [Heroes' transformations] felt monumental, both because the heroes finally had a ray of hope in the face of the villains, as well as being deeply significant to the personal narratives of these characters."
— Super Eyepatch Wolf, "The Impact of Dragon Ball Z"

A Super Mode or "Overdrive Mode" where a character temporarily becomes much stronger, almost always accompanied by a visible change. Basically, a Dangerous Forbidden Technique or Deadly Upgrade without the dangerous/deadly parts — it may be limited somehow, usually by time or a finite Power Source, but sometimes it's not even that (if it shortens the user's lifespan or similar, it's a Heroic RRoD). Very popular in action-based video games. May or may not have a requirement to trigger (usually anger), but must look awesome via glowing and floating.

These transformations are usually accompanied by either a failure on the part of the other party to intercede, or a temporary "aura of invincibility" that renders them incapable of doing so. Popularized by the Super Saiyans of Dragon Ball Z. Super Modes are particularly common in manga and anime.

The Super-Trope to Deadly Upgrade, Invincibility Power-Up, Limit Break, Next Tier Power-Up, Superpowered Evil Side, Unstoppable Rage, and often regarded as a One-Winged Angel act for heroes. Related to superpowered Animorphism and occasionally Super Empowering. Turns Red is the bad guy version of this. A Power Up Full Color Change, a Golden Super Mode, and the Standard Power Up Pose may be its visual indicators. A Fusion Dance sometimes results in this trope. When used by characters with Multiform Balance, the Super Mode is either All Your Powers Combined or Lightning Bruiser.

When Kim is in danger of being turned into a trophy by Warhok and Warmonga, Ron finally gets full control of his Mystical Monkey Power.

When Kim is in danger of being turned into a trophy by Warhok and Warmonga, Ron finally gets full control of his Mystical Monkey Power.