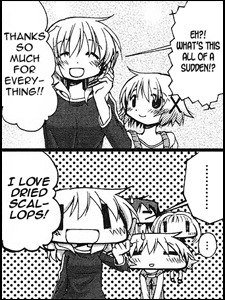 At the drop of a hat.
"Get ready for Gundam like you've never seen it before!... Really cute and tiny!"
— Toonami promo for SD Gundam Force
Advertisement:

An artistic style in anime in which a normally (more) realistically proportioned character is rendered in a shorter, rounder form, often with a big head and short limbs, somewhat resembling a caricature of themselves as a tiny yet plump toddler.

Generally considered cute as well as humorous, it's most commonly used in parody or as part of promotional material, although it can be found in some shows at points of extreme comedy/slapstick, or when characters are seen to be acting extremely "cute" or immature.

Also known as "chibi" (Japanese for "small") in some circles, although it's not just confined to anime — it's a very common form of Fan Art. Name any popular character, chibi art exists of them. It's almost as common as Rule 34. Often, plushies based on characters from media (particularly anime and video games) will have chibi proportions by default.

This also appears in video games, especially older video games with small characters compared to the screen, the Super-Deformed style was used mainly to get around graphical limitations so a character was recognizable and their face wouldn't be just a single pixel. Some newer games use a version of this where characters appear super deformed on the The Overworld or when the camera is far away but in cutscenes, character portraits, and battles they will be depicted with more realistic proportions (for an example, in Disgaea and Cave Story). See Graphics-Induced Super-Deformed for that.

For a character who's literally extremely deformed, see The Grotesque.