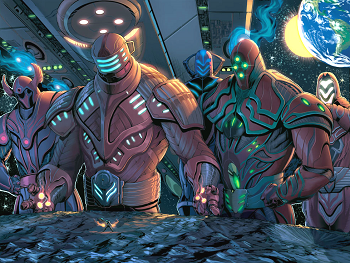 Now all it needs is some water.note See that small figure with flaming hands? That's Doctor Doom!
"Any sufficiently advanced extraterrestrial intelligence is indistinguishable from God."
— Shermer's Last Law

You know the type. Sooner or later one shows up on every Space Opera or Wagon Train to the Stars. They're the alien being that can do anything with the wave of a hand (or tentacle, or tendril of energy). Sometimes they're hostile, sometimes they're benevolent, sometimes above it all or just... different, but regardless they can really cramp the style of a young, expanding race looking to make a name for itself on the galactic scene. Usually, though, they tend to just be omnipotent jackasses, looking for a cheap laugh. More often than not, they tend to be egotistical and haughty, thinking little of humans and "lesser beings". Sometimes you can exploit their sense of honor or fair play, or their desire for solitude, to make them go away. Or maybe you just have to wait for their parents to come and take them home. Unfortunately, you can't always get rid of them — just ask Jean-Luc Picard (and don't even get his colleague Capt. Janeway started).

If you have to use something that's recognizable to the viewer as a machine, you're not Sufficiently Advanced. (See Higher-Tech Species.) If you can just wave your hand and things happen, you probably are (visual machines are allowed for really big effects, like making galaxies explode or transporting a planet from one side of the galaxy to another). If you are a machine, there's some wiggle room (and some overlap with Deus Est Machina).

What actually separates Sufficiently Advanced Aliens from genuine gods can get a little vague, especially with the likes of the Ori, or for that matter Q, who do claim to be deities, or, for that matter, Juraian royalty, who don't, but are. Usually, being found in space and/or opposing the heroes' lack of belief is considered enough reason to reject their claims. One possible distinction between the two is that gods are believed by their followers to actually be above the laws of physics (though there are plenty that aren't), whereas sufficiently advanced aliens have just figured them out enough to manipulate them to their favor (and again, plenty of exceptions there, too).

Sometimes, they'll show up to put Humanity on Trial. Occasionally, a human or humanoid alien will be assumed into their ranks. Often these beings will claim to be "more highly evolved" than humans, and that someday, if we're good little corporeals and eat all our vegetables and overcome our stupidity and bratty ways, we might grow up to be like them. Similarly, many sufficiently advanced alien species are also Perfect Pacifist People.

See also Great Gazoo and Energy Beings. When humans are treated like this, it's Humans Are Cthulhu or Thank the Maker. Conversely, if these beings are far enough removed from human understanding, they can be considered Eldritch Abominations, in which case they at least have the decency to take on A Form You Are Comfortable With.

Compare to Higher-Tech Species, when the aliens are more advanced, but not quite Sufficiently Advanced to count as this. Contrast with God Guise and Ancient Astronauts. See also Physical God, for an approach from the other side of the spectrum, and No Such Thing as Space Jesus, which is how stories of this ilk avoid the theological implications of the trope. Naturally, they are nothing like the Insufficiently Advanced Alien.

For when humans try — but fail — to deal with them and their frustratingly condescending attitudes, which can often be deadly, see Can't Argue with Elves. When humans can get the better of these beings, which is difficult, but not impossible, see Screw You, Elves!

Very frequently they are builders/users of Sufficiently Advanced Bamboo Technology.

If you want to go and try to compare these alien heavyweights, then you are Abusing the Kardashev Scale for Fun and Profit.