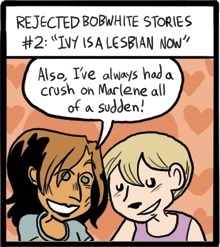 A character who pulls a flip-flop in terms of proclaimed sexuality or suddenly, for no apparent reason, feels strongly enough about it to become the Token Minority of their particular series for that particular sexuality.

This can be because the author changed his mind about a character, is catering to Fan Wank, or is simply providing Fanservice. In any of these instances, it's usually frowned upon. Not that it's actually unrealistic, but many viewers find it jarring. When handled well, it can be Truth in Television, given that in real life, many gay people do indeed attempt to appear heterosexual before coming out, but when handled poorly, it can instead come across as a sloppy or cynical Retcon.

Sometimes employed purely as an answer to the assumption that all undeclared characters in fiction must, by default, be heterosexual.

Can be implemented as a quick gag, in which case the characters may immediately become some variation of a gay stereotype (Camp Gay and Leatherman being the most popular), regardless of their previous character traits.

If this is done via Word of God instead of within a work, it's Word of Gay.

Compare to No Bisexuals. May result in a Straight Gay. Can be forced by introducing Situational Sexuality. Relationship Reveal is a chance to out a character with more buildup. For the race version, see Suddenly Ethnicity.