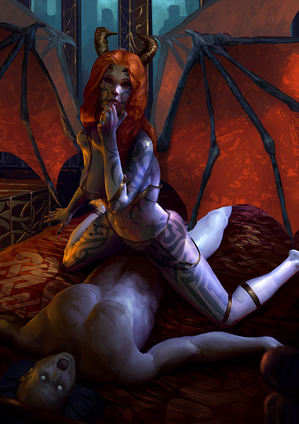 . Used with permission.
"O, father dear, I dreamed last night a man sat on me bed
And I fear, when I awoke I could not find my maidenhead".
— Fairport Convention, "Doctor of Physick"
Advertisement:

In folklore, incubi (always male) and succubi (always female) were demons who would sexually assault people in their sleep- the horrifying sensation of sleep paralysis, where you wake up and are unable to move, was known as ''incubus'' as late as Victorian times. Originally, these demons were not vampiric, had no need to feed, and were not particularly attractive, being sexual predators.

However, modern fiction writers don't want to use them like that, so the common traits of both succubi and incubi have become:

In some legends, Satan himself changed shape to be both incubus and succubus. See, Old Scratch wants kids but can't produce human seed, so he becomes a succubus, receives some sperm from a guy, turns into an incubus, and passes it on to a woman. How this transmits satanic genes is a question not addressed as the theory was invented before Mendel's time, never mind Rosalind Franklin's. In some other legends, the first succubi and incubi were the children of Lilith, who was the true First Woman who got kicked out of Eden for fighting too fiercely for dominance over Adam, via laying with various Fallen Angels.

The offspring of these demons and a human are either demonic infiltrators of humanity or basically mortals with mysterious powers. The legendary Merlin is sometimes said to be the offspring of an incubus and a nun. Incidentally, the above mythology went a long way to explaining away pregnant nuns in the Middle Ages without destroying their virtues. Better to be seen as the victims of demonic rape than participants in consensual sex, one might suppose. (Admittedly, there were periods when people took a very dim view of violating vows of celibacy, if the vower weren't powerful or well-connected.) Several cases of actual rape in politically tricky circumstances also appeared to have been dealt with this way. Even more importantly, it explained why Merlin could use magic (which was seen as contrary to God's order), but still be one of the good guys.

The modern viewpoint, with its much more lenient view of sexually liberated women (and sex in general), they tend to be Not Always Evil and their depictions feature a far greater number of subversions on the classic interpretation of succubi and incubi than straight examples. Most of them tend to be portrayed as Cute Monster Girls or Reluctant Monsters. They usually become a Succubus in Love, who ends up being redeemed once they find true love. Their Vampiric Draining powers are either non-existence or are used for a relationship roadblock and angst as they Can't Have Sex, Ever without hurting the one they love.

For demons in general being attractive seducers, see Hot as Hell. For other depictions of demons in media, see the supertrope Our Demons Are Different.