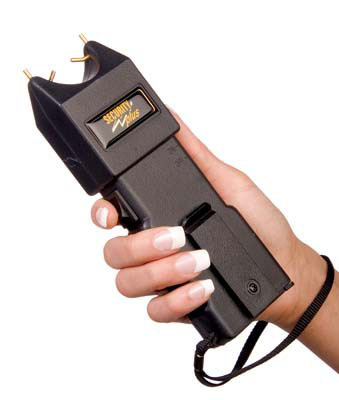 "Need a jolt?"
"You never have to regret a stun shot."
— Iella Wessiri, X-Wing Series

Weapons that will cause the target they hit to lose consciousness for a certain period of time. Extra points if they cause a person to be mistaken for dead by a casual observer.

Unlike the real world weapons made by Taser International, which work by a very powerful electric shock, many of these show no clue to how they incapacitate a target, simply acting like a nonlethal version of the Instant Death Bullet. And like the Tap on the Head often used in fiction for similar purposes, they almost never cause someone to be killed accidentally. In real life, Taser weapons have infamously caused several heart attacks, although they're still much safer than coshing or shooting someone.

If they intentionally cause pain, they may also be (or double as) an Agony Beam.

Useful when Thou Shalt Not Kill is in effect. Ideal as Family-Friendly Firearms and often part of a Non-Lethal Warfare. However most authors don't seem to consider that even if the target is not directly harmed by the stun effect, there are many situations where suddenly losing consciousness could be dangerous.

Note: Despite being called "guns", it's a misnomer, as they're usually neither actual firearms (in the sense of shooting ballistic projectiles) nor even "guns" in the Energy Weapon sense by any stretch of the terms. It arguably even becomes more of a misnomer as most stun guns have to be used at point-blank or have to make contact to work. Meanwhile tasers fire two small dart-like electrodes which remain connected to the main unit by conductors and delivers electric current to incapacitate a target.

Subtropes include Static Stun Gun for the electric-powered variant and Sonic Stunner for the sound-based version. May involve Instant Sedation (especially in the form of firearms firing tranquilizer darts). Contrast As Lethal as It Needs to Be. See The Paralyzer for a related superpower.