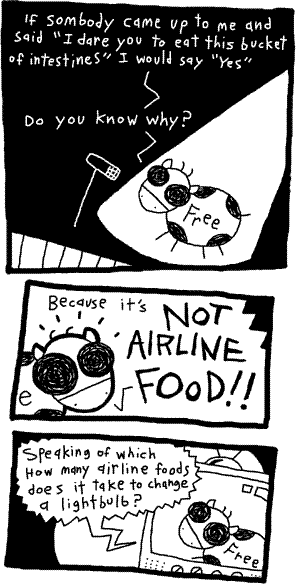 "Did you ever notice how men leave the toilet seat up?...[Chirping Crickets]...That's the joke."
— McBain, The Simpsons, "A Star is Burns"
Advertisement:

The stand-up comedy shticks that've been used, referenced, parodied, and satirized so much that they're tropes of their own, and possibly even cliches. Overlaps with Stock Phrases and Acceptable Targets to some extent.

Often a case of "Seinfeld" Is Unfunny (literally, in some cases) if a perfectly serviceable joke is ruined by sheer overexposure. Others fall victim to Values Dissonance (see: most racial humour). May also be Outside Jokes if they're based solely on the listener's ignorance. Often cause listeners to think, "Never Heard That One Before!"

Another form is Bottom of the Barrel Joke, when the comedian uses a raunchy or off-color remark as low-effort "humor." There's also Stock Jokes, for all the specific jokes and punch lines we've all heard a million times, as well as Stock Parody Jokes about a certain work.

Even if it's followed with a Rimshot, unruly audiences have been known to respond with a Collective Groan, or, if the comedian keeps it up too long, Produce Pelting.

(Rimshot)
Thank you! I'll be here all night, folks! Don't forget to tip your waitresses! And try the veal!
Feedback