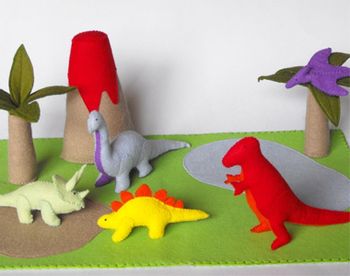 "Listen to the chorus of the Brontosaurus
And the Stegosaurus down by the swamp
Along comes a dinosaur making such a loud roar
Thumping with his feet and going stomp, stomp, stomp
Pterodactyl flapping, long beak clacking
Big teeth snapping down from the tree
Here’s the woolly mammoth, tusks all curly
Joins the hurly-burly, oh dear me
What a noise, it’s the boys
From the Prehistoric Animal Brigade!"
— '''The Prehistoric Brigade''' lyrics

note The song-related image depicts 28 scale-sized dinos grouped in periods: all of them are in the Stock Dinosaurs (True Dinosaurs) section of the Useful Notes.
Advertisement:

As just about any six-year-old will eagerly tell you, dinosaurs are awesome. And from Hollywood's point of view, they make for great, epic beasts and terrifying monsters, particularly given the fact that they actually existed at one point. Hence, it's only natural that writers would want to include dinosaurs and other extinct creatures in their stories.

Unfortunately, most writers only know a few types of dinosaur. Even dino enthusiasts may be forced to avoid lesser-known dino species, in case the viewers don't get it. As a result of this, series featuring dinosaurs, whether as a result of Time Travel or being set in Prehistoria or 1 Million B.C., are almost guaranteed to feature at least one of the following:

Various non-reptiles from prehistory may also be featured, often shown living side-by-side with dinosaurs even if they lived in vastly different time periods.

Other than Mesozoic reptiles, Cenozoic mammals and birds are the likeliest creatures to show up in fiction, expecially the megafauna of the Ice Age:

If you are looking for some Real Life info about these critters and others, go to the following indexes: