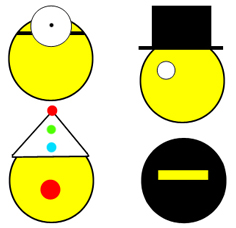 Tertiary Sexual Characteristics occurs when stereotypical female elements are added to a character to demonstrate she is a woman. If you have a yellow circle, and you stick a bow on it, you instantly recognize the circle is a girl.

Stock Costume Traits is that concept, except as related to characteristics or professions rather than gender. You add some costume element onto a character, and that is the visual signal they have adopted that characteristic. For example, if the circle has a pipe and deerstalker hat, we know the circle is a detective; if it wears a monocle and top hat, we understand that yellow circle belongs to high society.

Most of these are Dead Horse Tropes by now. See Clothes Make the Legend for a similar idea, but related to one specific character.

See also Hat Shop, which analyzes the connotations of headgear.