Staring Through the Sword 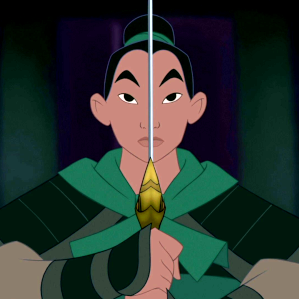 One of the Stock Poses: a character holds his or her sword upright, with the blade between his or her eyes, often followed by Stab the Sky.

The pose originates in the European Swordsmanship tradition. When saluting a superior, a Worthy Opponent, or the audience, the swordsman would bring his sword-holding hand in front of and close to his throat, with the tip pointing up and slightly forward, then slash down sideways, so the point stops near the floor next to his right foot. According to The Other Wiki, this custom originated during The Crusades, when the knights kissed their swords as makeshift crucifixes before charging into battle. Nowadays, it is mostly seen in competitive fencing, but has also seeped into all kinds of media thanks to the sheer awesomeness of the move.