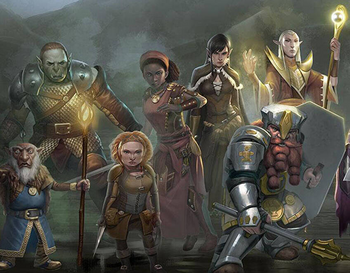 L - R: gnome, half-orc, halfling, human, half-elf, dwarf and elf.
"Learn now the lore of Living Creatures!
First name the five, the free peoples:
Eldest of all, the elf-children;
Dwarf the delver, dark are his houses;
Ent the earthborn, old as mountains;
Man the mortal, master of horses;
And half-grown hobbits, the hole-dwellers."
— Treebeard's song on the lore of creatures, The Lord of the Rings
Advertisement:

The barbarians and monsters will instead form a loose collection of tribes, hordes and disorganized groups, and tend to have an antagonistic relationship with civilization. Most often, they can be found living in the wilderness or in desolate areas, until they group together under a charismatic leader or a Dark Lord and head off to wage war on the civilized peoples. This group is often the most numerous and varied, both in and out of universe, and can include a very large number of monstrous creatures. When The Horde comes calling, it's common for almost every monstrous species in a setting to band together under its banner.