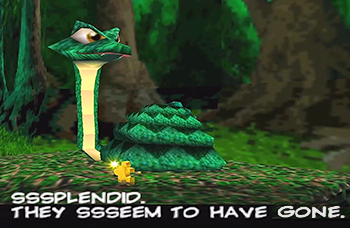 Ssso. Let'ssss talk about thisss article. And yesss, we did demonssstrate thisss.

Anyway, Snake Talk is the tendenccy of any snake or snake-like creature or person to accent any sibilant sound in a word, presumably to imitate a snake hissing.

Sometimes applies so broadly it affects any reptilian creature - even when it doesn't make any sense. As much as a talking reptile can make sense anyway, even if every other Talking Animal is perfectly capable of talking.

You see, reptiles do communicate with one another, but it tends to be largely visual; displaying boldly colored frills or crests and such. Several species don't even have vocal cords and have rather poor senses of hearing. It's really only sensible to the writers, since they think scaly creatures are gross, so they must sound scary.

Black Speech takes this a step further, and constructs a whole language out of it, albeit far less pleasing to the ear.

Often employed by Snake People and Lizard Folk. And sometimes even a Smug Snake.

If you are wondering, there are five letter "eses" in this article's title.

At a Duelling club organized by Lockhart, Harry Potter reveals himself to be a Parselmouth: A wizard who can speak to snakes.

At a Duelling club organized by Lockhart, Harry Potter reveals himself to be a Parselmouth: A wizard who can speak to snakes.