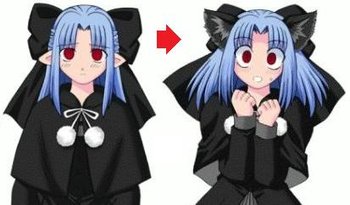 A symptom of a Super-Deformed Art Shift, where occasionally a character will sprout Unusual Ears or other animal features (paws, tails, etc.) during certain moments to accentuate certain aspects of their personality. What ears symbolize what varies from culture to culture, but generally they break down into three groups:

Other variants usually depend on the character and whatever is associated with them. If the character can actually transform into said animal it can sometimes be a clue of their true nature, though usually this is played for comedy and not meant to be taken seriously.