Spot of Tea
aka: A Spot Of Tea 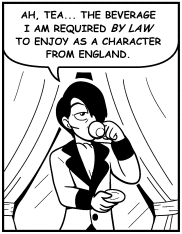 How stereo-tea-pical.
Tea is still believed, by English people of all classes, to have miraculous properties. A cup of tea can cure, or at least significantly alleviate, almost all minor physical ailments and indispositions, from a headache to a scraped knee. Tea is also an essential remedy for all social and psychological ills, from a bruised ego to the trauma of a divorce or bereavement. This magical drink can be used equally effectively as a sedative or stimulant, to calm and soothe or to revive and invigorate. Whatever your mental or physical state, what you need is a nice cup of tea.
— Watching the English by Kate Fox
Advertisement:

The great British author George Orwell (1984, Homage to Catalonia) was an avid tea drinker, even going so far as to write an article on how to make "A Nice Cup Of Tea"

Compare with Must Have Caffeine. See Tea and Tea Culture for info about tea and the world's Real Life tea drinking habits, including proof that the British love for tea is Freakier Than Fiction.