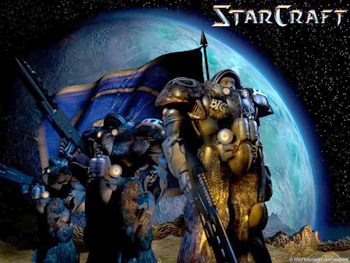 In space, no-one can hear you ooh-rah.
"They shall be my finest warriors, these men who give of themselves to me. Like clay I shall mould them, and in the furnace of war forge them. They will be of iron will and steely muscle. In great armour shall I clad them and with the mightiest guns will they be armed. They will be untouched by plague or disease, no sickness will blight them. They will have tactics, strategies and machines so that no foe can best them in battle. They are my bulwark against the Terror. They are the Defenders of Humanity. They are my Space Marines and they shall know no fear."
— The Immortal God-Emperor of Mankind, Warhammer 40,000
Advertisement:

Since Space Is an Ocean, Space Marines are the troops carried by spaceships, their roles paralleling those of conventional marines: mobile deployment, boarding hostile ships, securing ports — including Space Stations — from Space Pirates.

These guys are the number one troops of choice for the humans in the Standard Sci Fi Setting.

Space Marines first turn up in the short story "Captain Brink of the Space Marines" by Bob Olsen in Amazing Stories Volume 7, Number 8, of November 1932, and a later followup, 1936's "The Space Marines and the Slavers." The trope, however, fully rose to prominence with the use of the term in the wildly popular Lensman Series beginning in 1934. In 1959, Starship Troopers codified the trope, popularizing the emblematic Power Armor, The Spartan Way of training, and the array of exotic weaponry they wield. Warhammer 40,000 from Games Workshop is notable for taking these aspects to a peak, achieving the ideal "SPACE MARINE" Super Soldier, augmented with Genetic Engineering or cybernetics (or both!).

In many settings they fight as a squad, sometimes with Awesome Personnel Carrier support, swooping down in a Drop Ship, or launched right into the thick of it via Drop Pod. A notable exception to this are the many First Person Shooters that use the Space Marine background as a useful excuse to get a highly trained soldier alone on a hostile planet. This tradition starts with the much-imitated Doom series — see A Space Marine Is You and One-Man Army.

This page shouldn't be confused with the video game Warhammer 40,000: Space Marine, though that game pretty much is about them.

It should be noted that the name "space marine" is actually a misnomer — there's no water in deep space. Works aiming for more realism or a more Ray Gun Gothic feel may prefer to call them "espatiers", and the most direct Latin equivalent for the environment parses as "astroram". But for those wanting more to invoke the Romantic Space Is an Ocean trope the name space marine works just fine. Sometimes, "space marine" is culturally translated into "space [insert badass military unit here]" - for instance in Russia space marines are often called "space landing forces" (kosmodesantniki) after the VDVnote Vozdushno-desantnye voyska, "air-landing forces", often called just "desantniki" (rougly "landers") an airborne unit of the Russian military that has roughly the same reputation as the USMC and Royal Marines in American and British cultures.

Note: This trope is about the elite spaceborne soldiers themselves. Overly-generic Science Fiction military protagonists belong elsewhere, such as A Space Marine Is You for video games.