Space Base
aka: Moon Base 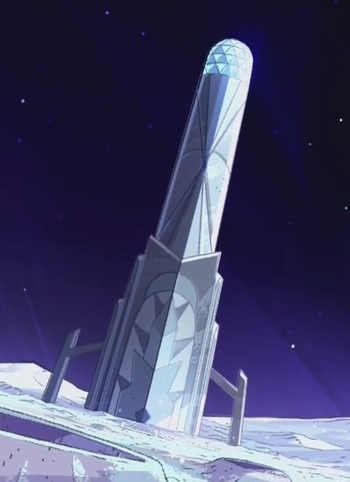 Your lunar headquarters since 4000 BCE.
Steven: This is the moon base. It's always been there.
Ronaldo: You have a moon base? I have so many questions! One, why didn't you tell me about your moon base? Two, take me to your moon base.
— Steven Universe, "Can't Go Back"
Advertisement:

A Supervillain Lair — IN SPACE! For total isolation from those pesky heroes, spy organizations, and other do-gooders, there's nothing better than your very own space station. Tailor-built for the villain with a bottomless budget, the space base often doubles as a Kill Sat, Wave-Motion Gun, or some other doomsday device that can wipe cities (or even entire planets) off the map unless the governments of the world pay a hefty ransom.

A variation on the theme is the moon base; it's within blasting distance of the earth, and there's a lot of prime real estate just waiting for the evil mastermind to snap up.

In video games, the base may form the basis of a Space Zone.

See Space Station for the less elaborate and villainous variant of this trope.

Compare Elaborate Underground Base, Underwater Base, and Island Base.