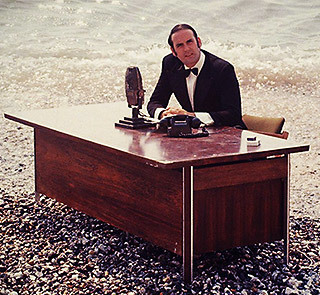 And now for something completely different —
John Cleese at a desk claiming to illustrate this trope.
It's...
Advertisement:

An episode which departs dramatically from the show's general formula. Events are played out from the point of view of the family pet, or are presented completely out of order, or it's an A&E biography of one of the characters, etc. May feature a Special Edition Title.

The Trope Namer is Monty Python's Flying Circus, where sketches opened with the famous Catchphrase, "And now for something completely different." A rather fitting trope namer, considering that something completely different happened in every episode and it had no general formula. The phrase was earlier used by Christopher Trace on Blue Peter to transition between segments.

A Poorly Disguised Pilot can be a subtrope of Something Completely Different. A show's Pilot and Grand Finale episodes are also this pretty much by definition.

Some flavors of this:

...And genre pages for the broader examples:

Alternative Title(s): And Now For Something Completely Different