Something About a Rose
aka: Suck My Rose 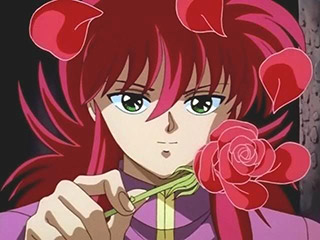 "Do you see my red rose? It marks your imminent death!"note As good ol' Panther Caroso says.
"And I envy the rose
That you held in your teeth, love
With the thorns underneath, love
Sticking into your gums."
— "The Masochism Tango", An Evening Wasted with Tom Lehrer
Advertisement:

What accessory could you possibly add to up your sex appeal 20 notches, show your sensitive side, and look really cool? A rose, of course! It's a flower, so it's beautiful and romantic like you, but it has thorns, and you're no wuss. Hold it between your teeth, if you want to up your sex appeal a few more notches. Perfect! And in some cases, it can be weaponized into a whip and/or petal storm!

Generally, this is used to indicate a character is Bishōnen (or Pretty Boy), a girly and badass man or a Casanova, although there are a few female examples out there (like The Vamp or the Girly Bruiser).

Sometimes, the color, number, and position of the roses can be used for Foreshadowing. This usually happens in reference to the Victorian custom of "the language of flowers," in which different flowers were given different meanings, allowing a bouquet to transmit a sort of informal coded message.

Speaking of Victorian, the common depictions of roses we see today are a relatively recent phenomenon. Commonly used depictions use a type of cultivar known as the hybrid tea

, which was first bred in the late Victorian era. Earlier depictions such as in medieval illuminated manuscripts and in the emblems of the Houses of Lancaster and York used non-spiral, five-petaled roses; some of which then are often colored pink (which is the oldest and most common color that's cultivated) or in cooler hues of red, by which other languages such as German, Russian and all major Romance languages use "rose" as a stand-in for pink.

In Japan, gay and bisexual men are referred to as barazoku, ("rose tribe"), so roses in Japanese media can also mean an entirely different kind of coded message.

Related to Flowers of Femininity. Compare and Contrast The Tragic Rose.