So Bad, It Was Better
aka: I Liked It Better When It Sucked 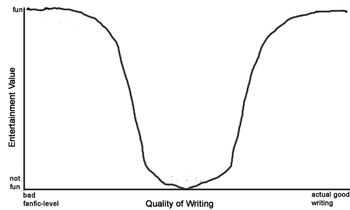 The Uncanny Valley of writing.
"The Lamborghini; what you're saying is it would be better, if it were a bit worse?"
— Jeremy Clarkson to Richard Hammond, Top Gear
Advertisement:

A work that's So Bad, It's Good can be so popular that it develops a fandom. This is part of the magic of Camp; even if the writers aren't trying to be tacitly absurd, it's entirely possible to get legitimate enjoyment out of it. But if the writers notice this fandom and try to cater to it — either by improving the work or by deliberately playing up its badness — they often fail to recreate the magic. They end up improving the work from So Bad, It's Good to So Okay, It's Average — it's still not good enough to stand up on its own, but it's now not bad enough to be entertaining.

Usually, this happens when a creator tries to reboot their effort and try to hit where they missed before, only for the audience to appreciate the creator's target less than what they accidentally hit the first time. Sometimes, though, they might take the So Bad, It's Good bits and play them deliberately — and destroy the Narm Charm in the process, because a big component of So Bad, It's Good is the creator's honesty and commitment gone entertainingly awry, which cannot be replicated deliberately. In Video Games, this is often seen when cleaning up Good Bad Bugs; the bugs might have been more fun than the rest of the game was meant to be.

This trope is limited to situations where fans honestly felt that the original was So Bad, It's Good. If the fans didn't think the original sucked and think the "improvements" made the work worse, you're looking at They Changed It, Now It Sucks!. If they acknowledge that the new work is technically better but still prefer the old one on its own merits, you're looking at Nostalgia Filter. If their main objection is that their pet meme has become "mainstream", you're looking at It's Popular, Now It Sucks!. The fans have to acknowledge that the original isn't good; it's just that there's more to salvage from it than from its "improved" version. Naturally, there's a huge subjective component to this, and the examples you'll see here are very general public perceptions of the work's quality and reception.

Contrast Surprisingly Improved Sequel, where a bad work is followed by a sequel that has improved enough to be objectively good on its own — enough to be more enjoyable than its predecessor.

Alternative Title(s): I Liked It Better When It Sucked