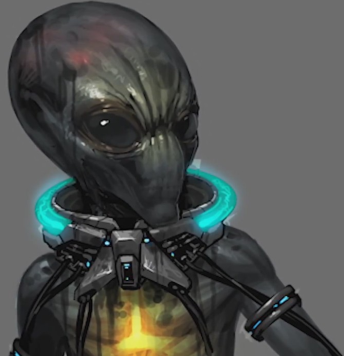 Meet Sectoids. Weak, disposable, own nothing in their life besides pistols and Mind Control collars.
Remata'Klan: He does not have to earn my loyalty, Captain. He has had it from the moment I was conceived. I am a Jem'Hadar. He is a Vorta. It is the order of things.
Capt. Sisko: Do you really want to give up your life for the "order of things"?
Remata'Klan: It's not my life to give up, Captain — and it never was.
— Star Trek: Deep Space Nine
Advertisement:

Mooks who have been enslaved, and sometimes considered Meat Puppets. If they aren't brainwashed and are forced by fear while retaining their minds they normally rebel, if only in small numbers (due to fear). Normally played to tug at those tug-proof heartstrings and show how vile the Big Bad was for forcing on innocents such a choice. Nine times out of ten, the brainwashed version won't rebel, and any supporting characters are depressed by their sad and miserable existence. These mooks are normally controlled by the Big Bad or are part of a Hive Mind, and rarely do things willingly. Slaves enthralled by More Than Mind Control are less likely to rebel, even against a perniciously Bad Boss, and may even Hannibal Lecture other characters about their suitability for slavery. If they aren't used depressingly, expect them to be comic relief. Some individuals may be quite evil on their own but are still conscripted under threats of death or worse and don't serve willingly. They can be pushovers or bosses, but they share the fact that they have about as much free will as a zombie. On rare occasions they will be a boss, but rarely The Dragon and never the Big Bad.

Subtrope of Forced into Evil, and often overlaps with Trapped in Villainy. If it's an entire species that has been enslaved for the purpose of serving as Mooks, see Slave Race.