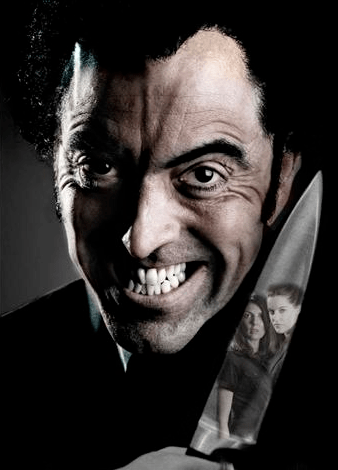 With a face like this, it's very easy to tell which side is in control.
"He is Bob, eager for fun. He wears a smile, everybody run."
— Mike, Twin Peaks
Advertisement:

In the animal kingdom, baring your teeth is a sign of aggression. In the case of humans — well, there's something very disconcerting about a smile that doesn't have an ounce of happiness in it. It's downright frightening when the smile is in anticipation of pain or death — yours, probably. Needless to say, the Slasher Smile does not inspire warmth in anyone who sees it.

The Slasher Smile is the Evil Counterpart of the Cheshire Cat Grin. In general, the difference is in the eyes of the character. If the eyes sparkle or are mischievously wicked, it's a Cheshire Cat Grin. If, however, the eyes are clearly crazy or malevolent, it's a Slasher Smile. If the grinning person is holding a knife or an axe or some other implement of painful and often bloody death, it's best to assume the worst.

While the Cheshire Cat Grin is a staple of The Trickster, generally one of the good guys, the Slasher Smile is the staple of the Ax-Crazy, unless said hero is a particularly dark or vicious Anti-Hero. Only expect to see a "nice" hero with a Slasher Smile if they've been possessed, are Brainwashed and Crazy, suffered a major Freak Out or if they've been taken over by their Superpowered Evil Side. Also, a devious Chessmaster or Magnificent Bastard is unlikely to look like this — it's too Obviously Evil, and they prefer the subtler Psychotic Smirk.

No, the Slasher Smile is more appropriate for The Dragon, the Mad Scientist, and most especially Serial Killers, but it can happen with any character who is gleefully violent and/or fits any "wild crazy person" stereotypes. Beings who hunt and eat victims we are supposed to identify with will also often have Slasher Smiles... in their case, it means "Hello, lunch!"

Some characters with a Slasher Smile wear the grin all the time — in fact, it's physically impossible for them to move their face out of it. For many, this has the added worry of making it harder to tell what they're thinking or feeling, because their face betrays no expression beyond the smile. This can be especially tricky for a character with a Face of a Thug — even if the smile genuinely has no malice behind it, others will assume there is.

Not to be confused with a Slashed Smile (although they sometimes overlap), and has nothing to do with the pleased smiles of Slash Fic fans upon the detection of impending Ho Yay. Hopefully.

Contrast Dissonant Serenity for a calm mood which isn't the slightest bit more reassuring, and also contrast Grin of Audacity. Sometimes paired with the Maniac Tongue. When the smile is merely creepy, it's The Un-Smile. May be part of the fear behind the Monster Clown. See also Technically a Smile.