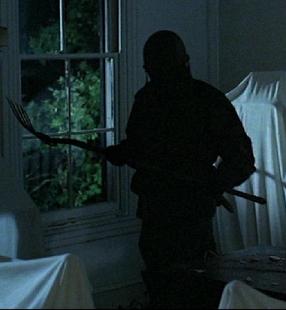 Here, we can see a slasher movie killer in their natural habitat: stalking the Final Girl.
"Zombie movies are about groups: outside, the zombies are legion; inside, the humans struggle to work together. Slasher movies are about individuals: one man is doing all the killing, and only one girl will outwit him and survive."
— Sara Bickley, reviewing The Ruins
Advertisement:

Near-indestructible Serial Killers stalking attractive young girls, a combination that allows for buckets of gore and enough flesh to titillate.

The killers, mostly driven by revenge, are typically somewhat Made of Iron, at a minimum, and usually Implacable. Many are borderline or explicitly supernatural. All of them can appear and disappear as if by magic, and the corpses of their victims are equally elusive. A slasher killer can whisk away a full grown adult's corpse in seconds, leaving not a single drop of blood behind, or swiftly arrange all its victims in an elaborate tableau, without ever being seen lugging the dead bodies around. The more explicitly supernatural killers will have powers ranging from Super Strength (all the better to pull victims through walls), the ability to appear in dreams and attack the dreamers, or other ghostly abilities.

The victims are usually teenagers or young adults, all usually guilty of some minor to moderate vice, which may tie into motives of revenge. Once the audience has had a convincing demonstration of their (usually sexual) misdemeanours, they are spectacularly slaughtered. If there's more than one sin or minority to pick from then the Sorting Algorithm of Mortality comes into play.

Eventually, there will be only one girl left standing, the Final Girl, normally the only "morally pure" member of the main cast. With varying levels of luck, learning or knowing how to survive, and, often enough, considerable help from her death battle exemption, she will kill the killer.

Come the next sequel, it will be revealed that the killer was actually Not Quite Dead, or in some cases, inspired someone to take up their mantle.

A subset of the Horror genre, although the schlockier examples replace suspense almost entirely with gore. They are often considered B-movies.

The history of slashers can be divided into several distinct waves. Alfred Hitchcock's Psycho is often cited as having a direct influence over the genre by introducing sympathetic characters that are unexpectedly murdered during the course of film, along with pushing the boundaries of sex and violence. The genre also has its roots in giallo films, a genre of Italian murder mysteries which rose to popularity in The '60s and The '70s, best known for their then-groundbreaking use of bloody violence and steamy sexuality. Many famed Italian directors, like Dario Argento, Lucio Fulci, and Mario Bava, began their careers in the giallos, directing classic horrors like A Bay of Blood and Deep Red. The earliest American (and Canadian) slashers, like The Texas Chain Saw Massacre (1974), Black Christmas (1974), Alice, Sweet Alice, and The Town That Dreaded Sundown, were carved directly out of the giallo mold.

After steadily rising in popularity throughout the 1970s, slashers finally exploded into the mainstream in 1978, when the genre's Trope Codifier in the form of John Carpenter's Halloween landed in theatres and became a massive smash hit. Looking to cash in on its success, film producer Sean S. Cunningham created the original Friday the 13th (1980), and once it too hit the big time, slashers were here to stay. A deluge of copycats, including sequels to Halloween and Friday the 13th, flooded theaters throughout the first half of the 1980s, from Prom Night (1980) to My Bloody Valentine to The Burning, and just when the craze seemed ready to die, A Nightmare on Elm Street arrived in 1984 and brought in a supernatural element to the proceedings. It wasn't until the final years of the 80s that slashers finally burned out, as the established franchises grew stale and the ripoffs grew more desperate, but it wouldn't be for long.

1996's Scream, directed by Nightmare on Elm Street creator Wes Craven, satirized the genre - while remaining a genuinely scary thriller - and became a big hit. Once again, studios sought to cash in on the film's success, and began the second wave of slashers, with films like I Know What You Did Last Summer, Urban Legend, and Valentine. These movies stood in rather stark contrast to their 80s brethren- good writing and characterization, considered disposable (and usually nonexistent) in the first era, were now all-important, as the plots now focused on the heroes trying to stay one step ahead of the criminals (who often based their murders on famous stories or past events in the good guys' lives) while also navigating their personal relationships, which - as teenage lives tend to be - were fraught with conflict and melodrama. The genre again petered out by the end of the 90s, due to parodies like Scary Movie as well as the sudden tragedy of Columbine and the rise of the J-Horror and Torture Porn flicks that dominated the following decade, but once again, it wouldn't be for long.

By the back half of the '00s, nostalgia for the original era of slashers began to rise (piggybacking on the usual way pop-culture nostalgia tends to be Two Decades Behind), and with nostalgia comes remakes. The Texas Chainsaw Massacre (2003), Halloween (2007) and Friday the 13th (2009) all returned, and a whole flood of new slashers, both remakes and original movies, followed once again in their wake. Now, in The New '10s, it seems as though slashers are here to stay, with films like A Nightmare on Elm Street (2010), You're Next, Hatchet, and Tucker & Dale vs. Evil able to safely co-exist with the more popular ghost- and demon-themed chillers of the decade. Time will tell if it stays that way.

Roger Ebert called these movies "Dead Teenager Movies" due to their focus on teenagers getting killed. Another popular nickname is "Bodycount Films/Movies".

Keep in mind that, while every slasher movie features a serial killer or a spree killer, not every serial killer or spree killer movie is a slasher movie. Also note that a slasher film is quite different from a Psychological Thriller, which tends to emphasize the Sympathy for the Devil part using a Freudian Excuse or two (and possibly a few Pet the Dog moments in the killer's favor), and de-emphasize the Final Girl, often killing off all characters. Many slasher movies are Exploitation Films, especially ones focusing on the gore and girls.

Also not to be confused with Hack and Slash video games, which are occasionally referred to as "slashers".

Want to write your own slasher flick? We have a handy writer's guide for anybody looking to do just that.

Homages, Parodies, Other Stuff Regarding the Genre: