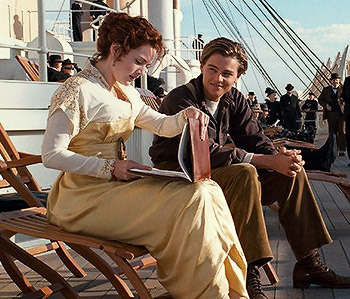 Good-looking poor city boy with a heart of gold - and he draws too!
Advertisement:

Bob and Alice are just getting to know each other, and go to get coffee. While Alice excuses her self to use the washroom, Bob notices a sketchbook sticking out of her bag. Curious, he carefully tries to get a look inside. He catches a glimpse of drawings of what appear to be Alice's pet dog, her friends, her typewriter - and several of him. Alice returns and sees him peeking at the sketchbook. Bob apologises, but Alice doesn't mind, and they begin to bond over the drawings.

This is often done to show a hidden side of a character, or the sketchbook or one of the sketches may be a Chekhov's Gun. The main contents of the sketchbook, or the drawings/paintings if they are on loose sheets of paper, could have significance to the plot, but more often than not it's to try and add a hidden dimension and to have one character attempt to understand another better.

The Significant Sketchbook can also be significant in any other number of ways - it could be a MacGuffin (like the Grail diary was in Indiana Jones and the Last Crusade). It could reveal a hidden detail that the hero didn't earlier know about the central quest or adventure, when inspected by another character who spots what the hero always missed. In some more visual storytelling mediums such as film, TV and comic books, the sketchbook could serve as a notebook in which a character may record clues or observations, but pictures always look nicer than just lines of words. Generally, this is with a sketchbook or with pictures and drawings in a notebook, but occasionally happens with lines of code or cryptic words mixed in with the drawings.

If the sketches are all about a single person, it could become a case of Stalker with a Crush, and the drawings could be the audience's first clue. If a Creepy Child is in possession of such a sketchbook, it could become a Nightmare Fuel Coloring Book.