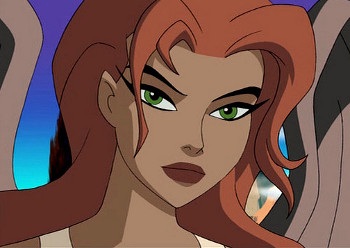 Green-eyed redheads are one the rarest color combinations found in humanity (with the exception of some abnormalities), making a character with this combination highly conspicuous. The fact that red and green are complementary colors also makes for a visually striking appearance. Therefore, this trope is used as an easy way to distinguish an important, notable character visually.

This trope might have been influenced a lot by Maureen O'Hara and her various roles, which also cemented this as the Phenotype Stereotype for an Irish person. Compare Redhead in Green.