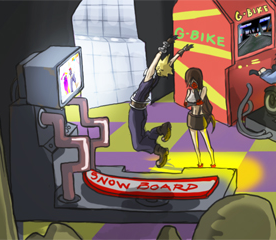 "Cloud, I know you're really into that snowboarding game, but can we please, please, PLEASE take some time to go out and stop Sephiroth from destroying the world?"
Art

. Used with permission.
"I won't lose at board games that easily... I've played many bonus modes in games. Like casinos in RPGs... Sometimes I want to play that more than the main game."
— Chiaki Nanami, Danganronpa V3: Killing Harmony (in the bonus mode)
Advertisement:

Sometimes you're handling the main quest and a game will throw in some sort of diversion for your entertainment. This minigame, sidequest, or secondary story is so absolutely addictive, interesting, or just plain fun that you'll completely forget about the main story altogether. Thankfully, the story does not progress without you so don't worry too much about it. This isn't absolutely limited to video games either. Many websites have so many nifty things going on that you don't even care about the main site at all. These are times when the main story or quest gets derailed by what you can do on the side.

Related to Attention Deficit... Ooh, Shiny! See also Just One More Level! and Quicksand Box. It will normally happen in the Minigame Zone. A Virtual Paper Doll, particularly one with a lot of customization options, can easily become one of these if you're the sort of player who cares about that. Compare and contrast Plot Detour where this is the content, as well Just Here for Godzilla, where the "Gold Saucer" is the main appeal of a work.