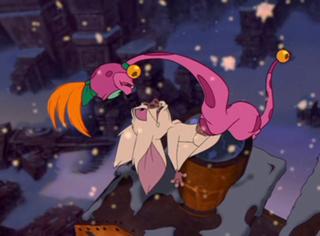 A staple of 1980s adventure cartoon shows, the Sidekick Creature Nuisance is a type of Sidekick. It is there to be cute, provide comic asides and occasionally get into trouble and need rescuing. Often a "merchandising critter." note Especially in 1990s Disney animated films. Sometimes it's crossed with the Nonhuman Sidekick. It frequently has a Verbal Tic - and truly gets on the main cast's nerves.

There was a time when even the most straight-faced of animated adventure serials had one to provide a bit of slapstick in the background.

Saw a revival in the mid-2000s when CGI became the norm for children's animation, with many films featuring them prominently in advertising material.

Note that this trope is for characters who are annoying to the other characters, not just to the audience.