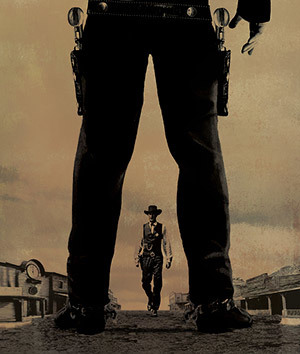 The Era: The Wild West.

The Place: In the middle of an empty, dusty road outside a saloon or other structure.

The Players: Two gunmen, almost Always Male, are approaching from opposite ends of the road, complete with holsters and fully loaded six-shooters. Bonus points if one hat is black, one hat is white, and at least one tumbleweed goes by.

The Time: The instant the clock strikes high noon.note At high noon the sun isn't in either person's eyes, thus leveling the playing field.

The Music: You know the one.

note Ironically, this most iconic of Western tunes was NOT the one accompanying the final showdown. It was an even more dramatic tune: https://www.youtube.com/watch?v=EujDcc2xEUI

The Hero (or Anti-Hero with No Name Given and a Badass Longcoat) and the Big Bad stand at opposite ends of the street, hands hovering over their holsters. The camera cuts between their faces (and eyes), their twitching fingers, the faces of the frightened crowd, and of the combatants framed by the opponent's legs. Long seconds pass. On a cue known only to the gunfighters — except for the clock striking 12 — hands slap leather and shots ring out.

The outcome is never certain, and any number of Westerns, even in the pre-Post Modern days of the Fifties, played with this trope without subverting it. Will someone cheat? Will one get the drop on the other, but not fire? Will both draw, and reach a Mexican Standoff? Will one intentionally miss, shoot the gun out of the other's hand, or simply gun him down? Or will some third party change the dynamic completely? Or perhaps they will both be shot.

A Dead Horse Trope (no pun intended) right up there with Chained to a Railway, but many works that featured it before it became cliche are still around. Its familiarity, of course, makes it a favorite parody. In said parody, one character is required to say, "This town ain't big enough for the two of us." Quite rarely will it occur to them that some urban expansion could solve all their problems.

The Sword Counterpart to this trope is the Single-Stroke Battle.

Examples for the major classic variation, where The Hero (or Anti-Hero etc.) and the Big Bad stand back to back in the street. They step forward ten paces, the spurs on their heels clinking with every step. At the tenth step, they turn. The shoot out begins... Should mosey on over to Ten Paces and Turn.