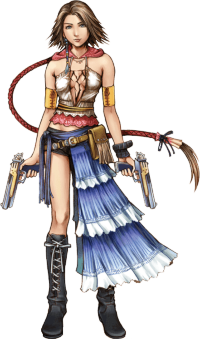 ...How did she grow that tail in two years?
Advertisement:

In character design, there is the crucial question: short hair or long hair? Short implies that the character is practical, independent, and strong. For women, long hair means that she's feminine, beautiful, even regal, but it may also be regarded as decorative or impractical. So, with these two opposing hair philosophies, will the creator choose the practicality and ease of a short cut, or the awesomeness of hair that goes fwish for dramatic effect?

Characters with this hairstyle simultaneously rock the short and the long styles—they're just that awesome. Distinct from Hime Cut in that hime cuts have mid-length side tresses to frame the face, and all long in back, while Short Hair with Tail is quite obviously a short style all around with a noticeable tail.

This is a character design trope, subtrope of Anime Hair. Convenient for accommodating No Flow in CGI — both the short hair and the long braid are easier to animate than long, flowing hair. Compare with Anime Hair, for the general likelihood of actually seeing these styles walking around, and Hime Cut, when the short hair is only in front to frame the face.

Not to Be Confused with a character with short hair and a literal tail.