Sheltered Aristocrat
aka: The White Prince 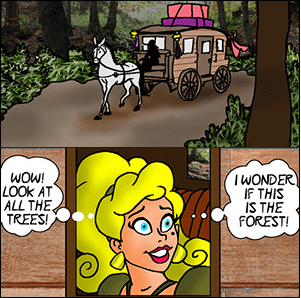 "But when you live in a castle, everything's done for you. All the time—they dress you, they feed you, drive you, brush your teeth. I admit it was a charmed life, until the day my parents cut me off, and I realized… I don't know how to do anything."
— Naveen, The Princess and the Frog
Advertisement:

The Sheltered Aristocrat is a character who has lived a life sheltered from the everyday trivialities which the lower classes have to contend with. In this way, they are pure and untainted by the hardships of the outside world.

This results in a certain naivety and ignorance, despite the numerous tutors they no doubt had all their life. When they are finally exposed to the outside world, it becomes apparent that the character is out of their depth. He doesn't realize how difficult and dangerous life outside their palace really is, and as a result, they are a Horrible Judge of Character, easily duped by conmen and stolen from by thieves. Often they think that they can talk their way out of confrontations, or throw money at any problem, and generally don't recognize, at least initially, that bad things could actually happen to them out in the real world. They will often be puzzled and even intrigued by the goings-on of everyday life, resulting in Mundane Object Amazement. Sometimes the irony will be taken further as the Sheltered Aristocrat proclaims themself to be an expert, having studied the lower class from textbooks, only to be proved very wrong. Often he has no idea how to do common, everyday activities and is thus rather helpless if they find themself on their own. They may also be unaware of any suffering their people are really going through in their kingdom until they come face to face with it.

These characters tend to fall into three main types: a plucky-type with child-like innocence and kindness, a silly and cowardly-type who is treated like a joke, and a snobby and superior type that can be cruel. Most of the types have a good chance to mature into the honorable and melancholic Wise Prince or the practical and down-to-Earth Princely Young Man during their adventures, though the cowardly and snobbish types have just as much of a chance to turn their back on the real world and shut themselves back in their palace, if they can.

This trope can include any character who is sheltered in this way. See also Gilded Cage, Upper-Class Twit, Spoiled Brat, and Spoiled Sweet. Compare Sacrificed Basic Skill for Awesome Training.