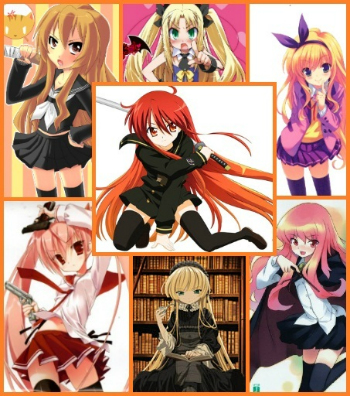 The Shana Clone is a character archetype originating in Japanese Light Novels, Manga and their Anime adaptations, begun by the popularity of the character Shana from the Light Novel series Shakugan no Shana.

Though perhaps not the actual Trope Maker, Shana certainly popularized this specific combination of characteristics and they are becoming an extremely common archetype, especially in Light Novels. This series of characters even had direct shout outs to the original, effectively identifying them as Expies of Shana, but then came some other, indirectly related characters following the formula, resulting in the formation of a whole new archetype rather than a collection of Expies, in much the same way as the Rei Ayanami Expy came to be.

Adding to the archetype are a number of more 'optional' traits which have come to be associated with these characters, some of which did not originate with Shana herself:

This trope is a subtrope of both Tiny Tyrannical Girl and Tsundere. Compare Rei Ayanami Expy and Char Clone for a similar phenomenon. The Stock Light-Novel Calamity Princess can be considered a successor of sorts.