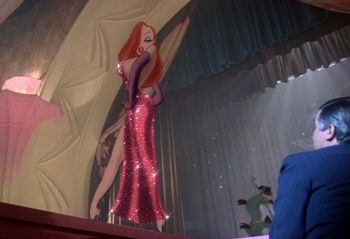 "They're hypnotized by my way of walking."
"Just the way she walked was illegal in thirty-seven States."
— A Day for Damnation
Advertisement:

When a woman walks with hips wriggling back and forth. She's more than likely to be wearing something tight and/or short enough that your eyes are drawn to her gorgeous legs and hindquarters. Commonly done while wearing high heels, although it's also possible to do this walk without them.

This is often used as part of a Head-Turning Beauty introduction or Walk This Way gag, usually having any onlookers Eating the Eye Candy or getting Distracted by the Sexy. You can be sure The Vamp will walk like this.

In a Fashion Show, this is one of the most common Modeling Poses used. When the Fashion Model reaches the end of the catwalk, she may strike a Contrapposto Pose or Head-and-Hip Pose, which can generate a similar effect in static form.